The Alphatross source and oscillator are housed in an RF shielded box. 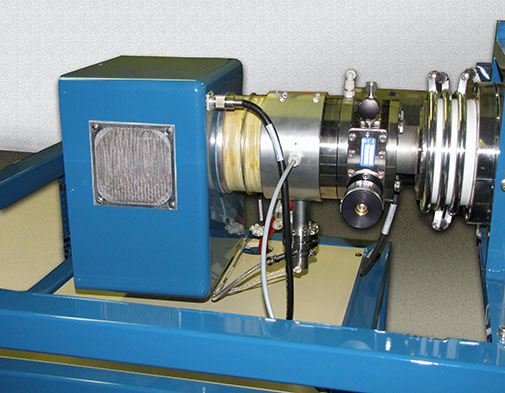 The Alphatross source with a charge exchange cell followed by a gate valve and gap lens as part of an injector for a 1.7 MV Pelletron accelerator.

The NEC RF charge exchange ion source – also referred to as Alphatross – was designed primarily for the production of He- beams for injection into tandem accelerators. The source can also produce H–, NH–, and O– beams. Contact us to learn more.

There are now more than one hundred Alphatross sources in use on tandem accelerators worldwide.
Contact us to learn more and start an order.

The only way that the He– ion can be formed is by a two-step process that involves the production of the He+ ion followed by charge exchange using an alkali metal vapor:

NEC can provide just the source, a complete injector system, or anything in-between.

Below is a list of beam currents that have been produced by NEC’s Alphatross.

This list does not represent the limit in capabilities of the ion source.  All elements that can exist in the gaseous form and form negative ions could be considered candidates for ion production in the Alphatross. Please contact NEC with any questions about potential applications or performance.