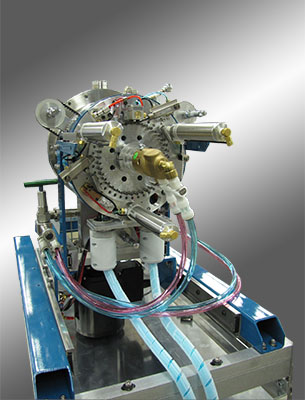 The Multi-Cathode Source of Negative Ions by Cesium Sputtering (MC-SNICS) was originally developed as a reliable sputter source for applications that required rapid cathode change and precise, repeatable positioning without cathode exposure to air. This source is most commonly used in Accelerator Mass Spectrometry (AMS) systems for the production of beams such as C, Be, I, Cu, Cl, and the actinides, although like the SNICS, it can create negative ion beams from all elements that form a stable negative ion. This is a very similar principle of operation to the single cathode SNICS source, with the exception of using a spherical ionizer instead of a conically shaped ionizer, and the addition of an immersion lens and 40 or 134 position cathode disk.

The simple cathode indexing system has proven to be highly reliable. It is capable of reproducing the cathode position to within 0.05mm of its original position.

The beam emittance is on the order of 5 πmm mR (MeV)1/2 for optimum transmission through a tandem electrostatic accelerator with proper optics.

Some Negative Ion Beams Produced by the MC-SNICS

This list is based on data from the NEC factory and contributing laboratories. All ion beam currents listed are measured after 30° or 45° mass analysis.

This is not a complete list of beams that can be produced by the MC-SNICS source. For beam current information for other elements, please contact NEC.

The electric cathode press model ECP-890 is designed to pack powdered elemental samples into cathodes (targets) suitable to generate negative ion beams. An electric press provides the user more control over the pressing process than a manual or pneumatic press, improving consistency among cathodes and providing an ergonomic process.